So today I received my second Wal-Mart beauty box. If you aren’t familiar with their boxes, they are only $5 I believe and they are quarterly/seasonal rather than monthly. The price point is pretty good I feel like and that does include shipping. However much like the Winter box I’m not impressed with what I received.

Here is what was in my box: 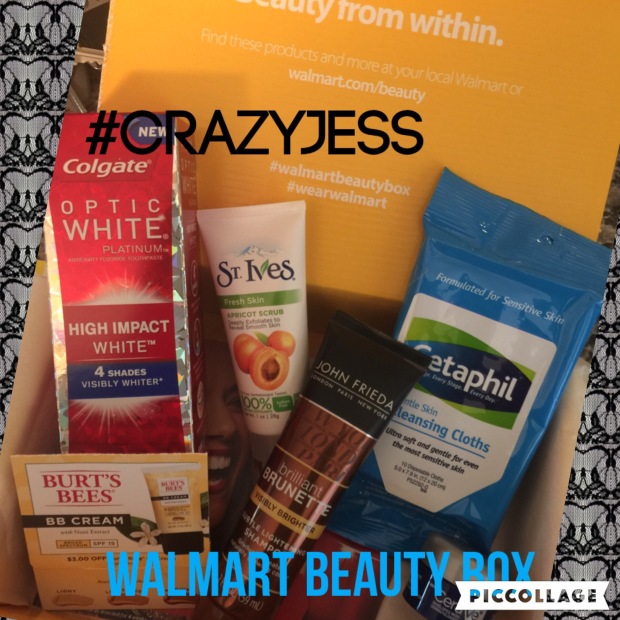 I don’t get it. This is just a box of random crap I’ve been able to buy at Wal-Mart for years. No new brands to try or new products to try (except the Burts Bees Bb Cream sample). It to me feels like a random box of crap from the travel toiletries section of the store. Maybe I’m being too critical. I mean obviously in comparison to Target, Glossybox, Ipsy and FabFitFun I shouldn’t have expected too much. But I just feel like Wal-Mart could do so much better than this. I’m disappointed but only out $5 so not the end of the world I guess.

It is cool that the box did have a sample of the Burts Bees BB Cream though. If I have to choose one positive thing I guess that would be it and I’m really reaching here.

I can always use whitening toothpaste but what is special or exciting about Colgate Optic White?  I’ve been using it for forever. So…thanks I guess?

Also, I think what annoyed me the most was receiving a John Freida product for brunettes when I’m a blonde (albeit a fake blonde but still! Lol).  I’ve always been a blonde. I don’t remember if I had to fill out a survey when I signed up where you enter your hair color and complexion. So if I didn’t then they really shouldn’t send items that are hair color specific. But if I did fill out a survey and indicated I was a blonde then it still doesn’t make sense to me why I got this.

I’m just not feeling this box and think I will be cancelling any future box deliveries. It’s just not worth it to me. Am I being too critical?

Are you a Wal-Mart Beauty Box subscriber?  What did you think about your box?  If you aren’t, what do you think about what I received?  Would you want to pay $5 for this box?